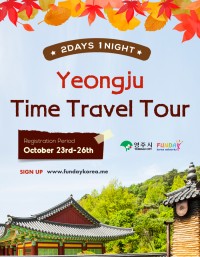 On October 26th Funday went for a captivating time travel tour to Yeongju, Gyeongsang province. It is a beautiful city, where history is still alive. So we just couldn’t help but invite our Funday friends to join us on our first tour to this magnificent place. For two days we were exploring the attractions hidden in Yeongju and enjoying autumn foliage!

We visited a thousand-year-old Buseoksa Temple, became a Joseon Dynasty Scholar at the Sosusewon Confucian Academy, that is registered as a UNESCO world heritage, spent a night in Seonbichon village (선비촌), a living museum depicting traditional Seonbi (Joseon scholars) life.

On the second day, we explored Korean Traditional Market and visited the Fox Eco center.

You can see more pictures here

Write a Review
Prev [Closed]Where H… Next *Registration i…