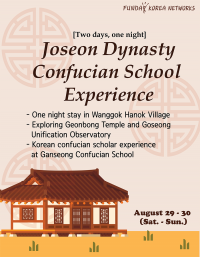 "Joseon Dynasty Confucian School Experience" program, which had been scheduled for August and canceled due to the COVID-19 outbreak, will be finally carried out on October 24th-25th!

It was the most competitive event of the last year. This Goseong in Gangwondo province invited us again to immerse in the school routine of Joseon Seonbi (선비). On October 24th, 20 foreign nationals from different countries around the world started their trip to learn more about authentic and rich Korean culture and history. And you know what? They didn’t only learn about Korea closer

but made new friends and had a wonderful time in Gangwon-do!

They began their trip to Hangyo Confucianism School, where the real monk provided them with this school's history.

He taught them how to be a real Joseon Seonbi and told them the most important eight (8) rules of Confucianism. Such as “Respect your parents, or you will regret it later,” and so on.

* Seonbi (선비) is a classical scholar known to be a person who has intelligence and a noble character.

Our Funday friends became acquainted with the bases of Confucianism, did some handicrafts by themselves, and despite the cold evening weather, enjoyed a traditional music concert inside the walls of the school.

The highlight of the trip was a night sleepover in a REAL traditional hanok village. Can you imagine it? Wangok (왕곡마을) is a village settled in the late Koryo era by people who opposed the founding of the Joseon dynasty. The village is still inhabited, and it was a unique chance to spend the night like a real local, enjoying the night starry sky and fresh village morning!

The final point of the trip was the Goseong Unification Observatory, where you can observe the sea and the starting point of Gumgang mountain in North Korea.

You can find more pictures from this trip here

Write a Review
Prev Seodaemun tour:… Next *Registration i…